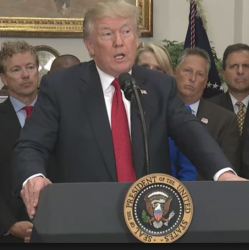 , serif; font-size: 18px; font-style: normal; font-variant-caps: normal; font-weight: normal; letter-spacing: normal; orphans: auto; text-align: start; text-indent: 0px; text-transform: none; white-space: normal; widows: auto; word-spacing: 0px; -webkit-tap-highlight-color: rgba(26, 26, 26, 0.301961); -webkit-text-size-adjust: 100%; -webkit-text-stroke-width: 0px; text-decoration: none; display: inline !important; float: none;”>U.S. District Judge Reed O’Connor, federal judge in Texas who declared Obamacare unconstitutional, to downplay the impact of the case. The Trump administration wants to reassure the public his decision was not effective immediately and he did not intend “substantial disruption to the healthcare markets” after the presidents’s misleading public comment made about the December 14 court ruling. The president wrote “As I predicted all along, Obamacare has been struck down as an UNCONSTITUTIONAL disaster!”. Late the White House Communications Office issued a corrective statement “the law remains in place” and was not, in reality, “struck down”.

U.S. Justice Department originally backed the court case to declare Obamacare unconstitutional but now realizes that they have no other plan to fund healthcare. The Trump officials want to assure the public that Obamacare is still the ‘law of the land’ despite the president’s statements that “Obamacare Is dead” that are meant for political purposes and are not meant to confuse people or to lie to the public about the availability of legally available health coverage under Obamacare. At least one public official believes that Trump can be held legally liable for his lies that could cost people to forfeit government-provided health insurance.

The issue is expected to be resolved in the when the Democrat-led Congress regains power and resumes a “healthcare for all” agenda. Neither the Judge’s ruling nor the U.S. Justice Department have any effect on the private commercial health plans listed at Freedom Benefits that are exempt from most Obamacare laws.